The short-beaked common dolphin is a medium-sized dolphin, easily distinguishable by a very unique hourglass-like pattern on the side of the body. It was the first species to be described scientifically and its name reflects the wide distribution of this species. However, in the Mediterranean Sea, the abundance of its sub-population has decreased significantly in the last few decades, making it endangered, as reported in the IUCN (International Union for Conservation of Nature) Red List.

Adult length can reach 2.5 m and weight 150-200 kg. The body is dark grey and black up to the top, with a black outline that connects the rostrum to the eyes. The belly is white, while on each side the hourglass pattern is coloured yellow, or gold, in the front and grey in the back. 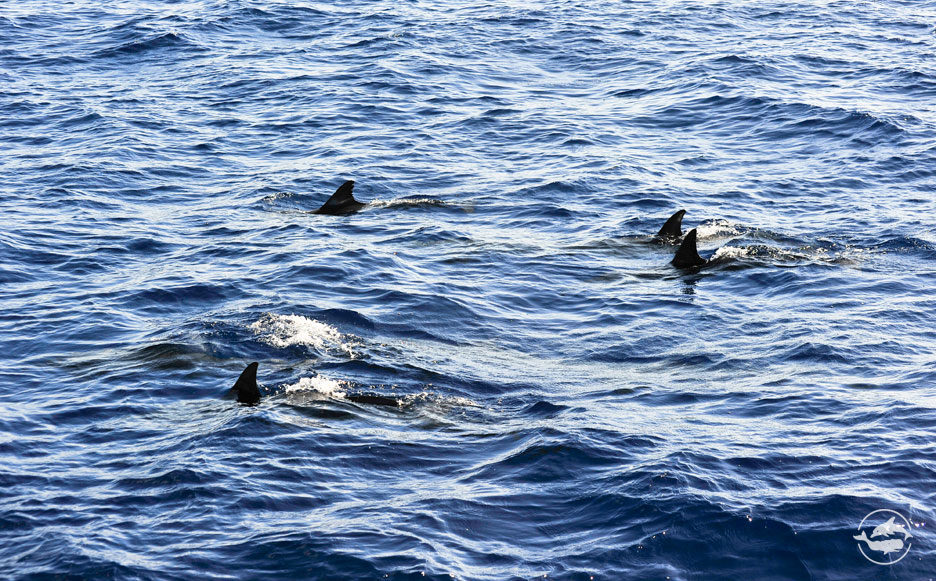 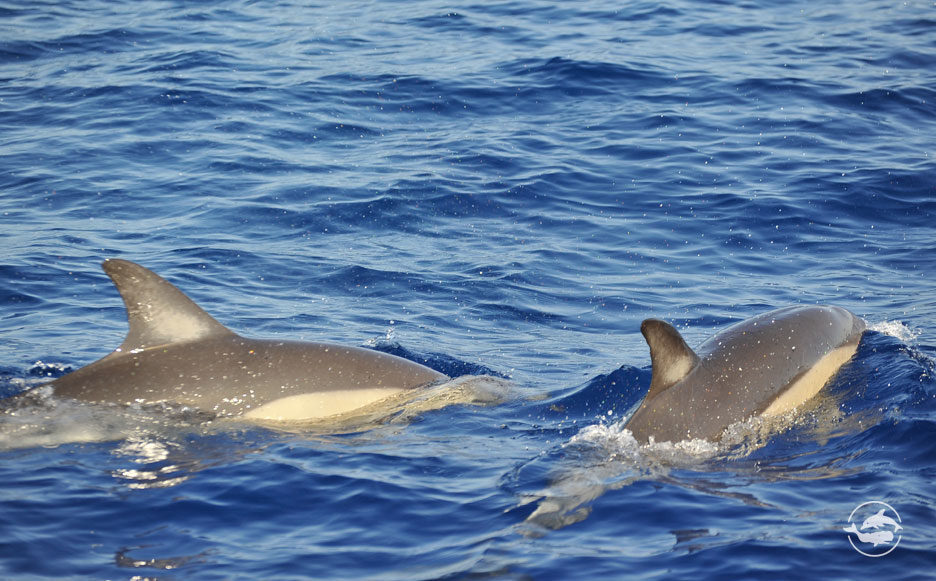 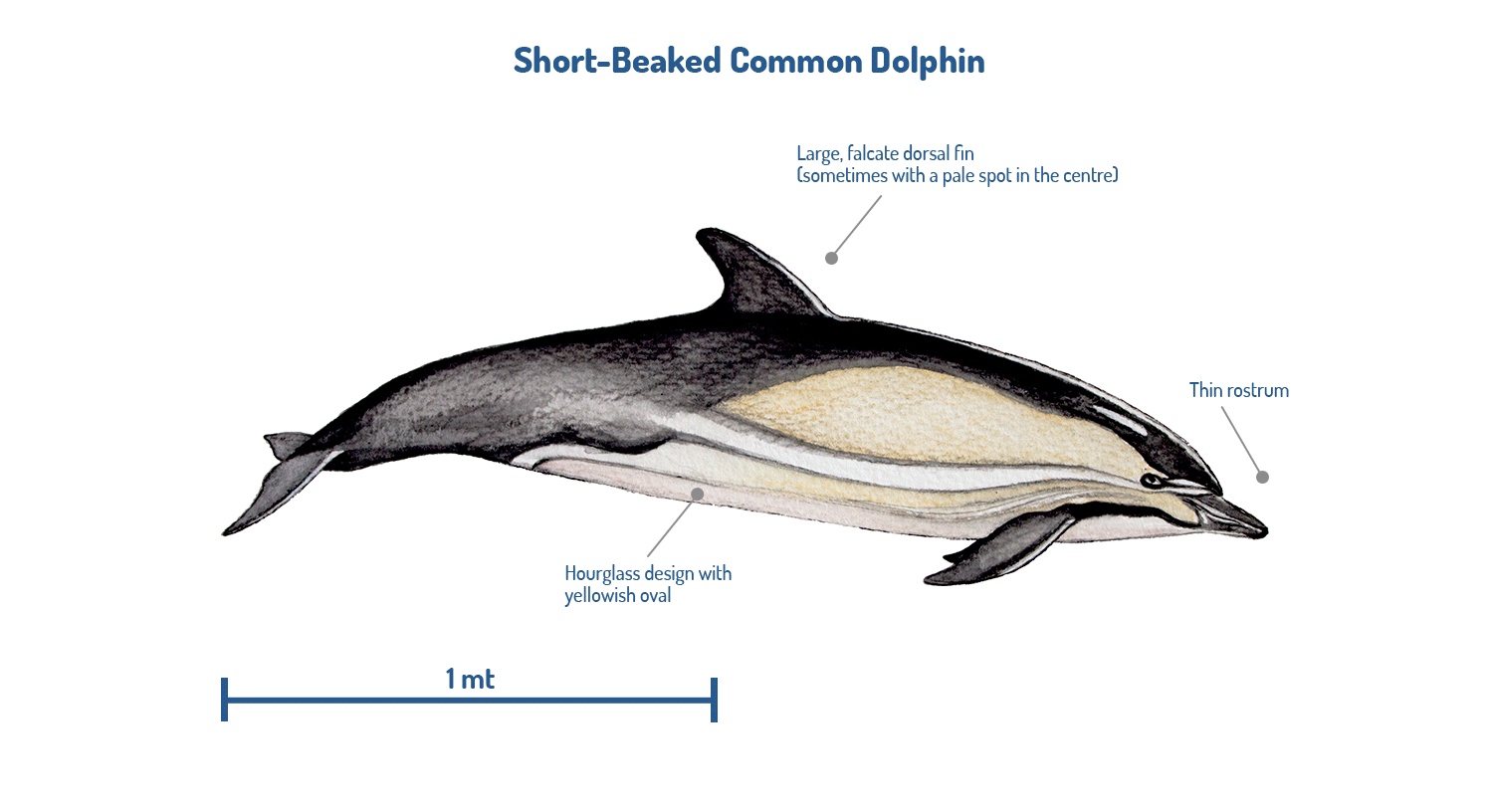 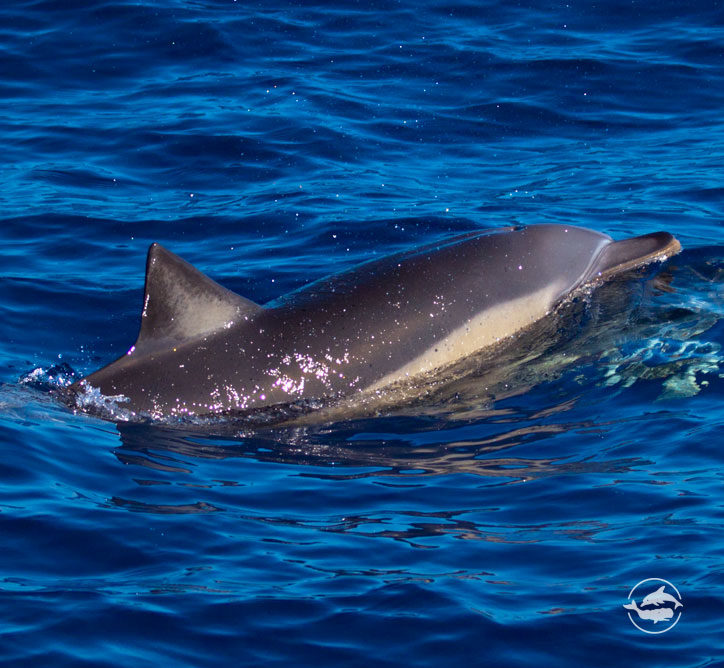 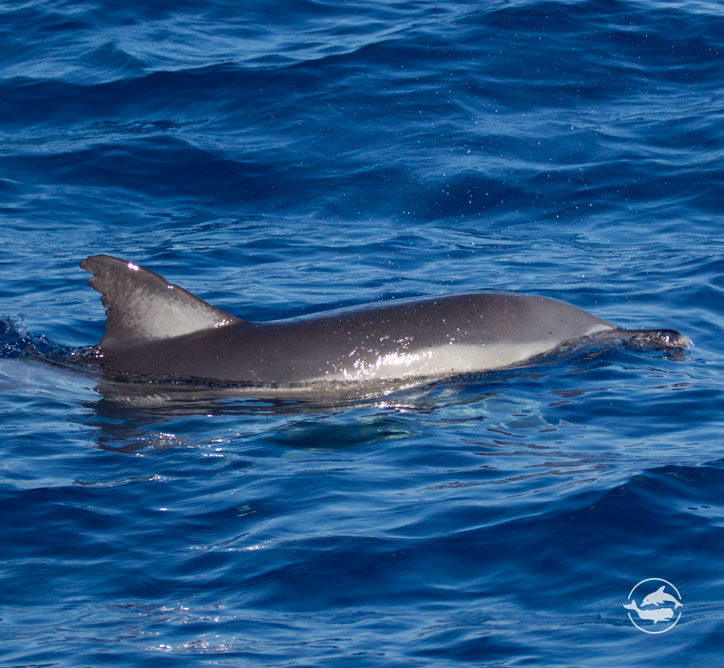 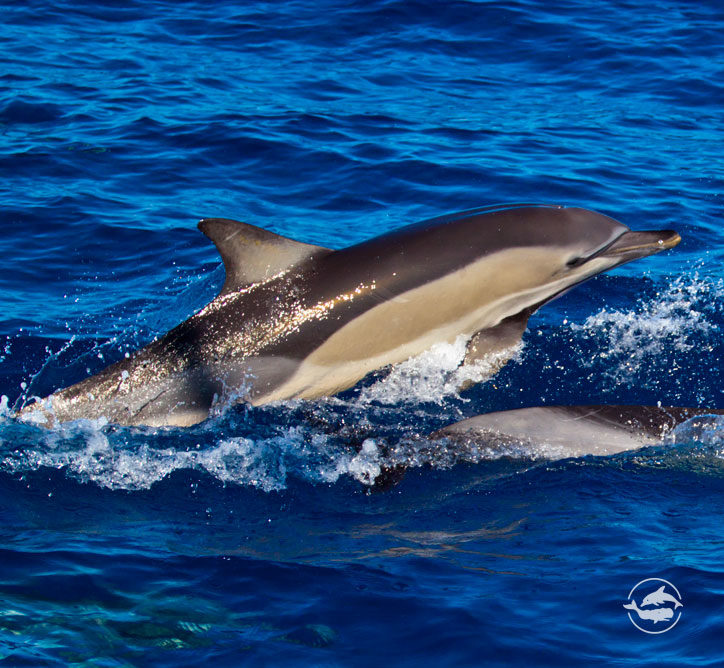 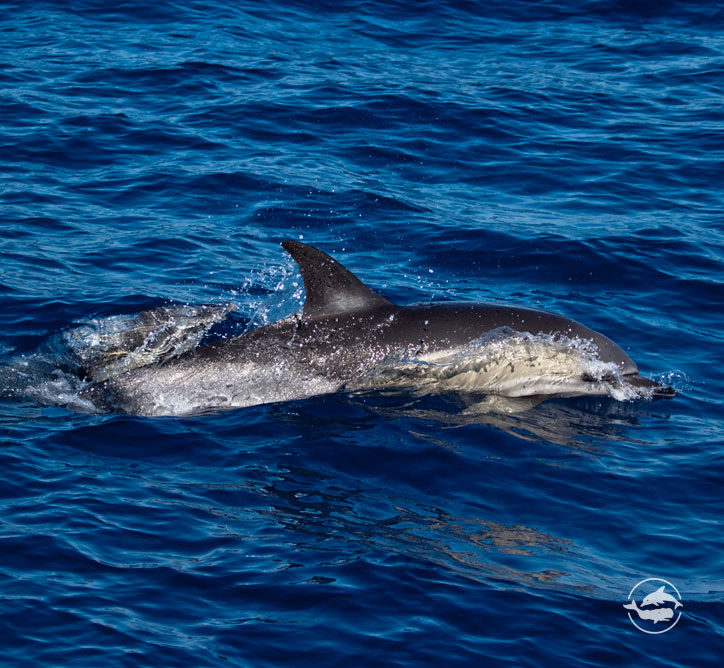 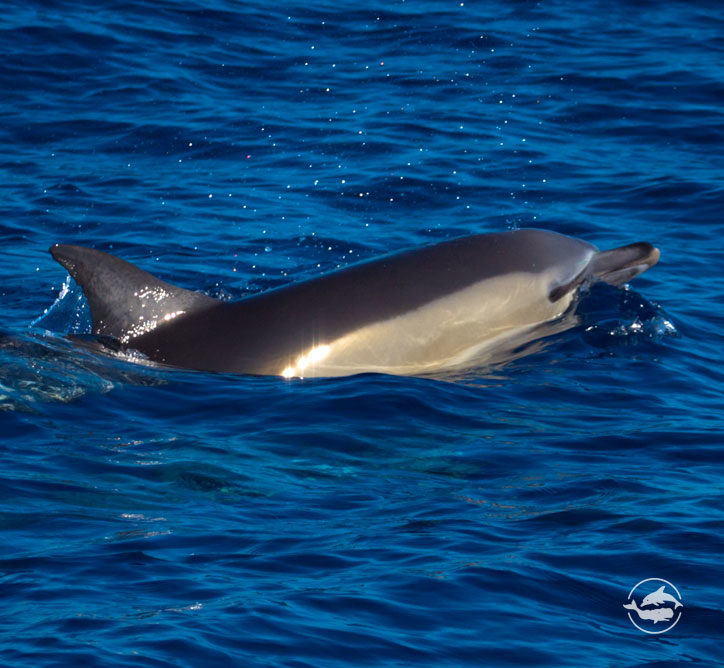 Short-beaked common dolphins are found in warm tropical to temperate waters. They prefer offshore waters with steeply sloping seabed, in areas characterised by a strong upwelling but they can be also found nearshore. The Mediterranean common dolphin represents a sub-population distinct from the one that lives in the Atlantic Ocean.

The diet varies with season, region and time. In some areas common dolphins feed mostly at night, in other they feed mostly on epipelagic schooling fish.

The short-beaked common dolphin has a varied diet consisting of many species of small fish and squid that live less than 200 meters deep, such as herring, pilchard, anchovies, herrings, hake, sardines, bonito, and squid. Most foraging occurs in waters shallower than 50m but dives can reach 280 meters.

Males become sexually mature at the age of 12, while females towards 10 years. The breeding season is typically and usually summer. In the Mediterranean it coincides with the period between June and September. Calving takes place after a 10 to 12-months gestation period, female dolphins give birth to a calf every 1-4 years.
Both sexes live up to 23-35 years.

Common dolphins are very active on the surface, frequently performing acrobatic leaps and porpoising out of the water when travelling at high speed (up to 40 km/h). Groups can be very large (up to few thousands in some parts of the world) and composed of smaller social units of 20-30 individuals not necessarily genetically related. Usually, they rest during the day, and feed mostly at night. They are enthusiastic bow riders, often approaching boats and ships from a distance, and they seem to enjoy riding the “snout waves” of large whales. Vocalisations have an extensive repertoire, including clicks, whistles and burst pulse calls. Like bottlenose dolphins, they emit signature whistles that other individuals recognise. 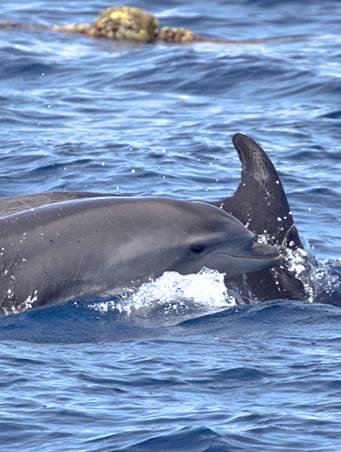 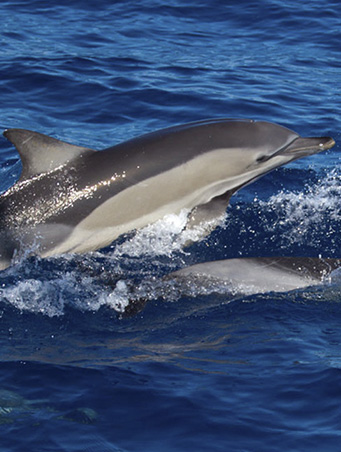 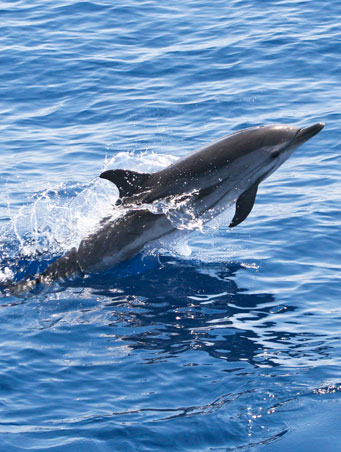 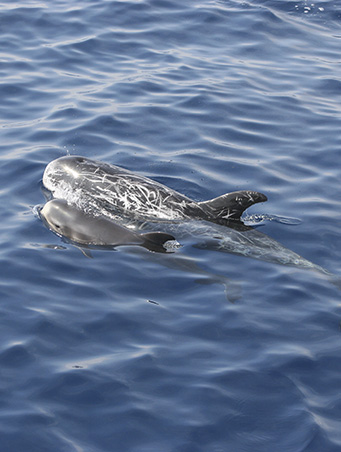 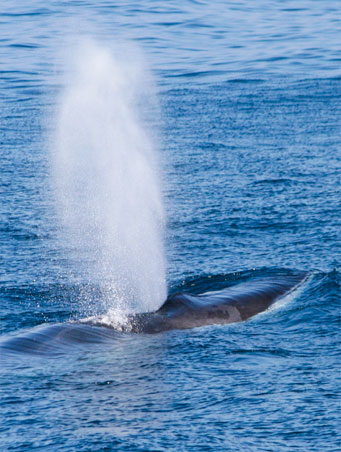 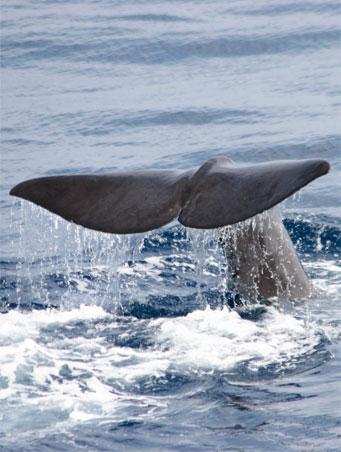 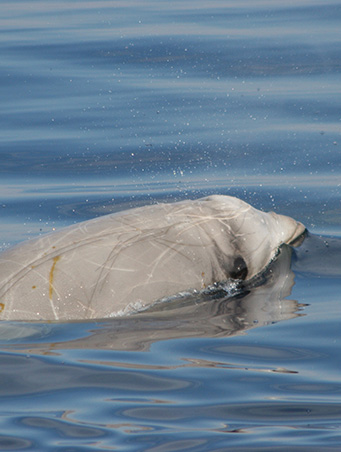 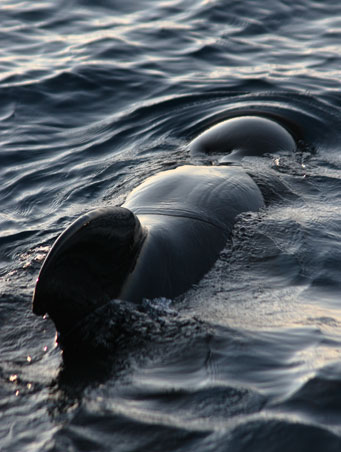